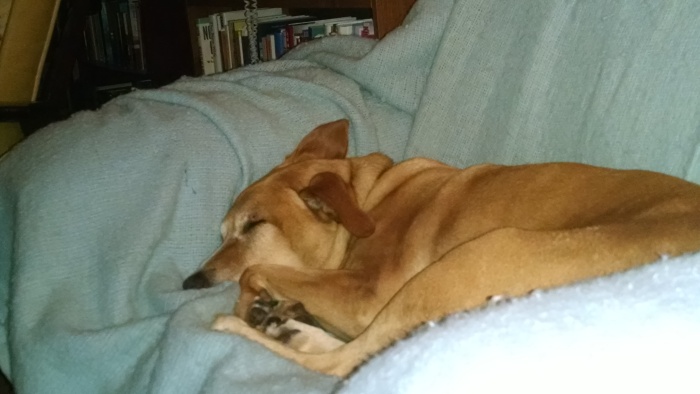 Happy Fourth of July, U.S. readers. Have fun and be safe. While you’re eating barbecue and watching fireworks, I’ll be home holding my puppy’s paw. The fireworks frighten her. Also, she’s injured. I don’t know if you remember last year when I wrote about her knee surgery, but we’re about to do it again.

I had not been home an hour from my trip to San Jose last week when Annie started limping. When she tried to put weight on her back left leg, she just fell down. Uh-oh. I hoped to find a thorn in her foot or some other minor problem, but I knew what it probably was. The vet confirmed it the next day. As often happens with Labs, after one knee goes, the other follows. She has a torn ACL (anterior cruciate ligament) and will need surgery. Here we go again.

When I told my father about it, I forgot that I never admitted how much it cost last time:  $4,000. My father was shocked. He noted that she’s an old dog and suggested I should just let her go.

Not a chance, no more than we should put him down because he has a bum leg. Annie is my person, my companion, and yes, my baby. I will spend whatever it takes to get her walking again. She is actually doing pretty well on three legs, but we’re doing the surgery. The last procedure worked well, and I’m confident that six months from now she’ll be walking on all four feet again. So what if I have to make massive payments to pay for it?

Would I do this if I had a human baby to take care of, too? I suspect I would, but I might have to debate that with a husband who disagreed, who had a more practical attitude toward money.

Meanwhile, I’ll be staying home with Annie tonight. I am going out to watch a parade with a friend this afternoon, but then I’ll scurry back in time to give my pup her dinner and pain medication. Maybe we’ll watch a movie and share a bowl of popcorn.

I know the parade will be loaded with kids. I know I will be torn between grieving over my lack of grandchildren and being glad I don’t have to deal with little ones who scream, whine, and dart out into the street. My friend, who is a grandmother, won’t have children with her either because they live far away. If you live long enough, you don’t have to deal with other people’s kids, although you might have to love their dogs.

What are you doing for Fourth of July? Does it bring up the childless miseries? Do share.

It was Fourth of July. Everyone seemed to be gathered in family groups, and there I was with my dog Annie. My friends I had planned to spend the day with had suddenly gotten busy with visiting children and grandchildren, so I headed to Yachats, a small town to the south where the 1960s continue unchanged. They were having a street fair. After walking around a little bit, Annie and I settled in one of the plastic chairs near the stage where a group was performing music that seemed to be a blend of reggae, New Age and yoga chants. Annie leaned against my legs, nervous in the crowd, a little worried about the tie-die-garbed woman doing a hula hoop dance a few feet away, the lady doing henna tattoos under the canopy next to the stage, and the tiny human who kept asking if she could pet my doggie. Sure, I said and watched her pat Annie’s broad tan back.

Next to me, the little girl’s mom exposed her baby bump between her midriff top and long skirt. She had flowers henna-tattooed around and below her navel. I will not let this bother me, I told myself. I sang along with the music, I pet my dog, I stared at the blue sky and green trees rising up behind the stage. The temperature was perfect, we had nowhere else to go, nothing else to do. But there were kids and moms and dads everywhere.

The night before, watching fireworks in Waldport, I was surrounded by couples with children, little ones and big ones. I felt like I didn’t fit in. And here, watching barefoot young women in flowing dresses dance with their children, I had to wonder how I missed out on something so natural and normal. Men and women come together and make babies. Isn’t that the way it’s supposed to go? Didn’t I want that? Where did I lose my way? If I had stayed with my first husband, wouldn’t we eventually have had children? Maybe I should have married someone else. But I was 22. I didn’t know anything. I didn’t know this could happen to me.

Annie was getting hot and restless. I was getting sad. “Come on,” I said, and we went home to our big house and big yard with no children and no mothers.

Sorry. I’m feeling down today. You know how that goes. I hate holidays. They bring out the blues. Don’t you find that’s true? How was Fourth of July for you?

******
Starting Sunday afternoon, I’m going to be offline most of the time for a week or so. If I don’t get to your comments or post something new, please be patient. I will seek out wi-fi as often as I can. Have a great week.

It’s a drizzly Fourth of July on the Central Oregon Coast, which does not bode well for the planned parades and fireworks, but I’m content to stay home and enjoy a good book, maybe watch a video. I do worry about the puppies not getting out to play, but they’ll be all right.

If I had children around, it would be a different story. After all, aren’t they the ones who get the most excited about Fourth of July? The food, the fun, the fireworks are all new and thrilling to them. We have something in the nearby town of Yachats called the La De Da Parade. Anybody can join in, the sillier the better. If we had kids, could we deny them the privilege? In a tiny town like Yachats, they might well be representing their scout troop, their school, their dog club, their swim team, whatever. I might even be walking with them in the rain from the Commons around the downtown streets and back. Rain or not, that’s what moms do, right?

When my husband and I attend the parade, we watch from the sidelines, then skedaddle to a nearby restaurant for a romantic lunch for two, eating seafood croissants at a table overlooking the bay while all those parents and kids scramble to reunite and find something cheap to eat before dashing off to other holiday events, all of which will culminate in finally opening the big box of fireworks the second it gets dark.

As a non-mom, I can choose to stay home and do nothing special. I don’t even have to watch fireworks. I can just close my eyes and remember the many fireworks displays I have seen before: at the Calgary Stampede, at Great America, at Disneyland, at the Bees Stadium in San Jose after the baseball game, and so many other places. I can even track back to my own childhood. We could see the big fireworks show from Buck Shaw Stadium from our driveway. Dad set off smaller fireworks from the red, white and blue box Mom had bought earlier in the week. My little brother and I watched, swirling sparklers around, painting pictures of light in the darkness. I can still smell the smoke, hear the crackle, whoosh and bang of the Roman candles and firecrackers, and see the bright colors flashing in the street. The whole neighborhood came out, the summer nights were deliciously cool, and it was so much fun.

If I had children, I couldn’t deny these experiences to them—or to myself. It would be like getting a chance to relive my own childhood and share the best parts of it with a new generation. Although I’m not sad to stay in on this rainy holiday, I am aware once again that my life as a childless woman is different from the lives of those who have children and grandchildren, different from the life I could have had.

I’m wearing red, white and blue. Why not? It’s Fourth of July. Have a happy holiday and do something to delight the kid in you.