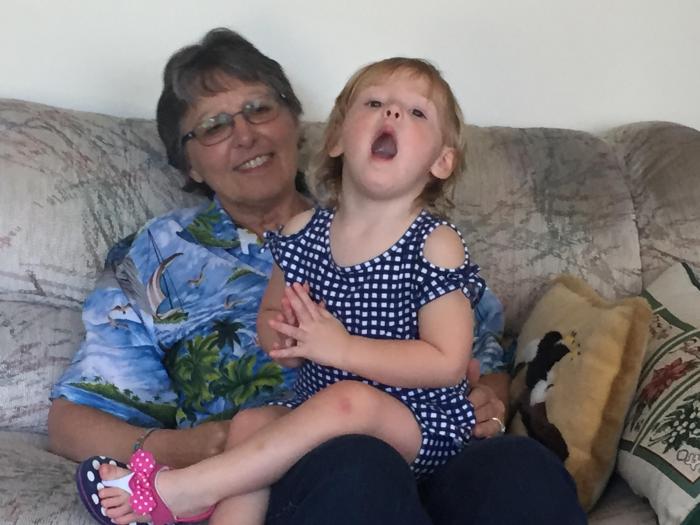 Being an aunt is the best. You don’t have to earn it, justify it or explain it. Yes, there are honorary aunts, and I’ve got a relative who insists on dubbing all adult cousins “aunt” and “uncle,” so the kids grow up thoroughly confused, but I’m talking about real aunts (and uncles).

I just came back from my dad’s house in California. No Wi-Fi, hence no post last week. It was a challenging trip. I was originally going to attend my niece’s party to celebrate her birthday and the adoption of her little boy. But she got sick and had to cancel. I should have canceled, too, but I had already gotten the time off, and I had told my 96-year-old father I was coming. I put Annie in doggie jail and drove almost 700 miles to San Jose. The drive felt extra long. I was sleepy and tired as I dodged trucks, RVs, and cars on I-5. When I arrived, my father was in a terrible mood, but I did my best to help him, despite temperatures nearing 100 and no air conditioning. I was alarmed at how his health had declined in the two months since I saw him last. I cooked, cleaned, gardened, and assured him I would do whatever needed doing.

Early on the second morning, I woke up sick. Stomach flu. The sites online describe it as a sudden explosion, followed by a strong desire to die. Yes. Total output, fever, chills, aches, the works—on the hottest day of the year in San Jose. I lost six pounds in two days and wasn’t much help to my dad (who wasn’t much help to me). As soon as I could drag myself out of bed, I continued trying to help him. We fixed the bathroom sink, I pulled weeds, I cleaned the refrigerator (pleasantly cold), cooked, and washed dishes. I went to Jack in the Box and bought him a milkshake.  I listened to hours of stories about the old days on the ranch, in the Pacific during World War II, and on the job as an electrician. Eventually my stomach stopped threatening to erupt, and I could stand for more than a minute.

My brother came to visit with his son William and his two-year-old granddaughter Riley. My nephew explained to his little girl that I was “Papa’s big sister.” Riley has lots of aunts, including four with names that are variations of “Susan,” but I’m Papa’s only big sister.

Any doubts about whether I should have gone to California were erased when Riley came running to me with a big smile, arms open wide for a hug. Yes, aunthood is good. She’s at the age where she’s discovering the world and is rarely still or quiet. I’m glad I’m not responsible for her 24/7. I don’t understand half of what she says. But I loved interacting with her and watching her as she explored my dad’s backyard and got soaked playing with the sprinkler on that hot afternoon. And I loved spending time with her daddy, a giant of a man I remember as a funny little boy with glasses who didn’t mind hanging out with Aunt Sue.

Aside from our Saturday with the kiddos, it was just Dad and I, two people who usually live alone. I’m alone because of the whole widow-without-kids thing, but my father has two children, two grandchildren, and three great-grandchildren. He rarely sees any of them, doesn’t know when their birthdays are or what they care about. He expects nothing from them and offers nothing in return. Part of that is being a guy. Mom was the one who kept the family connections going. Part of that is the sharp-edged side of his personality that I have known all my life. Big sigh.

Dad is uncle to nine wonderful adults, along with their children and grandchildren. Again, not much connection. He talks a lot about his family history. He loved his Uncle Louie and his Uncle Walter. I don’t know what happened. I guess you make what you will of the opportunity.  I think you have to start when the nieces and nephews are young, offering your love, your time, and your interest in what interests them. The rewards can be great. And it’s way easier than being a step-parent.

I know sometimes it feels too painful to be around other people’s children. Perhaps seeing your siblings become parents just reminds you of what you’re missing. But if you’re lucky enough to be an aunt or uncle, don’t miss this chance to love and be loved by a little one.

For more about being a childless aunt or uncle, read Melanie Notkin’s book Savvy Auntie and check out her blog at the Savvy Auntie website. Ten years ago, Notkin established July 22 as Auntie’s Day, so if you can claim aunthood in any form, go celebrate.

Also visit my previous posts about being an aunt. “Free to Be Aunt Sue” is about my relationship with Riley’s daddy, William. “Learning How to Be a Great Aunt Sue” talks about my first time meeting Riley.

I welcome your comments on being an aunt or uncle. Also, do you say “ant” or “awnt?”