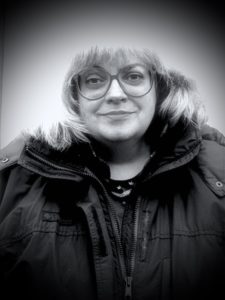 Sally Grant Carr seemed to be everywhere. If there was a gallery opening, a rally for peace, a singalong, or a poetry reading, she was there with her big glasses and fluffy white hair. So when about 30 friends gathered Sunday at Café Mundo to celebrate her life, it felt odd that she wasn’t among us.

Sun beamed through the big windows and skylights, lighting up the art on the walls and hanging from the ceiling as people from the various facets of her life settled at the wooden tables in the quirky tree house-like restaurant where Sally used to hang out. Many of us had not known that she died on April 1 until the notice for the Celebration of Life appeared online at newslincolncounty.com. What? Sally gone? No, where is she really?

But a small circle of friends who had sat by her hospital bed around the clock as she finally gave in to a lifelong lung condition were all too aware. Wouldn’t the hospital refuse to let you into intensive care, I asked. Wouldn’t they refuse to tell you anything? One of those friends, a tall woman with a booming voice, said she informed the hospital staff that Sally had no family, and her friends were coming in, whether they liked it or not. “They told us everything,” she said.

Sally’s parents died in a car accident when she was 18. She was married a long time ago, but the marriage ended. She left her home in Connecticut to start fresh on the west coast. She had no children, no siblings, no family at all. The people of Newport, Oregon became her family. That happened because she reached out. She cared. A graphic designer by trade, she got involved at local art galleries and worked with a local book publisher. She came to our monthly writers’ gatherings (and she bought all of my books). She got together with friends for a weekly happy hour party. If she was lonely, she didn’t complain about it.

Friends said she liked to go on late-night drives, loved to watch the moon and stars. She also loved to talk, a brief call or visit often going late into the night.

Perfect? No, she was goofy and sometimes annoying. But now that she’s gone, we miss her.

I last saw Sally at a meeting at the senior center for people who live alone. The object was to help us connect with each other and with resources for help. I remember Sally being more concerned about other people’s worries than her own. I suspect that she was somehow involved in that Secret Santa box that arrived on my doorstep shortly before Christmas.

We talked about getting together, but we never did. We should have. I’m not good at reaching out the way Sally was. Now she’s gone. Lesson learned. Take a deep breath and call, text, email, something.

It was a cheerful gathering, full of love for Sally and for each other, now that she has brought us together. We shared our memories, ate cake, and took home photos as keepsakes. Sally was not religious, so there was no church service. I don’t know what happened to her body. I’m sure she had something arranged.

The one jarring note: Her will, written in the 1970s, did no good because everyone named in it died before she did. The state of Oregon is taking over her estate. Can they do that? Yes, they can. Read this. Get your paperwork in order, and keep it up to date. If you end up with no family, you can leave your money and possessions to friends or a favorite charity. Make your wishes known.

Those of us without children worry about ending up alone. That doesn’t have to happen. Not if you have friends. I recently read a book titled One’s Company: Reflections on Living Alone by Barbara Holland. This upbeat, often funny book published in 1992, offers everything from how to make a proper cocktail to how to attract lovers. One of the comments that sticks in my mind is about the value of friends. Children, she notes, are only with us temporarily. In the end, it’s better to have one true friend. Think about that. So often our friends are the ones who really know us, who show up when we need someone.

Something to think about as you agonize over whether you’ll be alone if you never have children, especially if your partner divorces you or dies. You’ll be okay.

We have gotten some great comments on last week’s post about foster-adoption. Keep ’em coming.